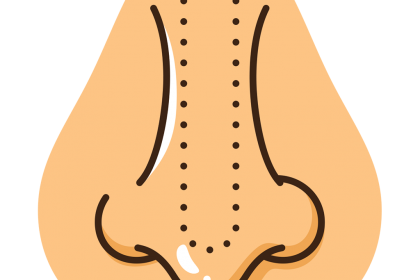 The nose dominates our face, sometimes literally, and it contributes to the first impression a stranger has of us. The shape of a nose can be cause for teasing and nicknames. For people with noses that do not conform to our norms of beauty or at least acceptability, life may be difficult as a result of it. It is not by chance, that a “nose job” is the most often performed plastic surgery in the world.

Throughout history, the question of beauty has moved the mind. It was understood as a question of the proportions of the constituent elements of the object. Since antiquity, people have come up with formulas to describe the ideal beauty – including a beautiful face. During the Renaissance, artist have perfected these formulas and used them in their works. However, it is open to discussion whether or not an ideally shaped nose does indeed fit into every individual face.
More realistically, the beauty of a nose is also determined by how well it harmonises with the rest of the face.  Even a reshaped nose should express the personality of its bearer and neither family nor ethnical ties should be completely eradicated. No matter how beautiful the nose may look on its own, if it does not fit in, it will – again – stand out like some foreign object. As is the case with all plastic surgery, the effort behind it must not be visible, the result must be as a natural as possible.

Do men and women have different aesthetic expectations?

Women prefer a small, straight or slightly curved nose with an upward tip. This “feminine” shape is not what men usually want. When reshaping a man’s nose, the surgeon should be careful about the extent of nose reduction, if any. Men usually desire a straight nose with a well-shaped bridge, but without a bump. The tip should not be curved upwards or downwards, and it should certainly not be pointy.

Who is a good candidate for rhinoplasty?

Everyone who is not satisfied with the shape of their nose, who have a realistic idea about the extend of any changes and whose state of health is no obstacle. It is also advisable for persons with breathing problems cause by their nasal structure. In this last case, a nose correction may be combined with reshaping.

What is a good age for rhinoplasty?

As a matter of principle, we only accept adults. However, in case of serious nose deformities or breathing problems, we may accept girls as young as 16. In boys, nasal development continues until they are 18 years of age. They are, therefore, no good candidates for rhinoplasty at a younger age. Again, as with all plastic surgery, patients must have attained a certain degree of emotional maturity. That is another reason why underage patients are an absolute exception for us.
The dominant age group for rhinoplasty are the 18-25 year olds. With advancing age, in particular beyond 40, the conditions for a successful result deteriorate; the skin loses its elasticity and begins to harden. In applicants over 40 years of age, their state of mind should be examined.

Who is not a good candidate for rhinoplasty?

Persons with thick and fatty skin, and persons with weak nasal cartilage must be advised that the desired result may not be achievable. Deteriorating skin quality with advancing age is another complicating factor. During consultation, older patients should be asked about a recent psychological trauma. Plastic surgery after divorce or the loss of a loved one can further worsen a psychologically difficult situation. In such cases, it may be advisable to first consult a psychiatrist.
People with unrealistic expectations, exaggerated views of their nasal “deformities” accompanied by complaints about how “unbearable” life is as a result of it, may suffer from Body Dysmorphic Disorder (BDD). BDD manifests itself as excessive concern about perceived defects of one’s physical features. Also in these cases, prior consultation of a psychiatrist is advised.
Haemophilia sufferers and people with blood coagulation disorders should not undergo rhinoplasty.

How does the evaluation phase before the actual operation look like?

Plastic surgery always requires a comprehensive exchange of information between patient and surgeon. The surgeon wants to know what exactly the patient wants and expects from the operation, and the patient wants to know how the intervention is performed and what the associated risks are. It is helpful when patients bring pictures of noses they like to the consultation. In the pre-planning process, the face is scanned, and in a computer simulation, the expected result of the surgery visualised and examined. The surgeon also checks for nose breathing problems which may involve a nose endoscopy. If sinus problems are suspected, a CT scan is taken before the operation

What to do and what not to do before treatment?

How is the surgery performed?

A frequently used procedure is an incision at point where the upper lip meets the nose base. The nasal skin is lifted and the framework of bone and cartilage laid bare. After that, the bone, the nasal bridge, the nostrils and the tip of the nose are brought into the desired shape. If the nose needs to be built up, own cartilage or implants are used. Bone or cartilage structures that obstruct the air ducts are corrected. The skin is then re-draped over the new frame. To protect the nose, wound dressing made of paper, and on top of it, a layer of plaster are applied.

Do you use nasal packing after the surgery?

Only in very special situations. After operations on the nasal septum, which separates the nose into two chambers, we place small silicone tubes in the nose. Nasal packings (tampons) are the most important cause for postoperative pain and discomfort. They prevent nose breathing, and their removal is painful and can lead to bleeding. Not to use nasal packing significantly improves the patients’ wellbeing.

The operation is performed in a clinic under general anaesthesia.

How long does the procedure take?

Is the procedure painful?

The procedure is not painful. Patients mainly complain about nose breathing difficulties, swelling and bruising.

What happens after the operation?

Patients are usually discharged the same day. In the first 2 days, swelling, bruising and the occasional nose bleed are the norm. To prevent this, we use ice packs at a very early stage. We do not use nasal packings. However, despite that, patients may experience some nose breathing problems in the first few days. Swellings inside the nose can be mitigated with physiological salt solutions and nasal spray. After a couple of days, patients can breath freely. After 2 days, patients can watch TV, read, and leave the house. The plaster and the stitches are removed on the 6th day. Once the wound dressing has been removed, the patient can return to work. Any lingering bruising can be covered with makeup. Swellings recede to a large extent within 3 weeks; after 3 months, 80% has disappeared. It takes, however, one year, until the nose has attained its final shape. In the first 3 weeks after surgery, patients should not engage in any sports where they may receive a blow to their nose. For the first 3 months, the nose must be protected from the sun.

What problems can occur after rhinoplasty?

Nose bleeding immediately after surgery is the most frequent problem. If it persists, the patient may need follow-up surgery. In the late postoperative phase, the main complications are slight asymmetries, and in more severe cases drooping of the nose tip. Other problems may concern dissatisfaction with the new contours of the nose (too high, too short, too pointy, etc.), and breathing difficulties. These problems can be avoided if you choose a competent surgeon and receive comprehensive consulting before the surgery.

What do you mean by drooping of the nose tip after surgery?

In patients with a deep lying nose tip, it may return to its old state after the healing process. This happens when the tip is not sufficiently supported after correction. It should not happen when the operation is performed professionally.

Who should perform the nose reshaping surgery?

You should entrust this operation either to an expert plastic surgeon or an ENT surgeon. In this procedure, the nose must be considered holistically. We do not share the view that the ENT surgeon is responsible for the breathing duct, and the plastic surgeon for the nose’s shape. When choosing your surgeon, you should make sure that the surgeon has experience in rhinoplasty, takes his/her work seriously and has a keen aesthetic sense.

Is a second surgery on the nose possible?

If necessary even more often. However, with every additional surgical intervention, the chances of success deteriorate and the risk of complications rises. For this reason you should make sure that your first choice is a good one.

Does nose reshaping require removal of cartilage from other places in the body?

Cartilage is necessary in every phase of the operation. If the patient had no previous surgery, the cartilage can be taken from the nose itself. Other sources are ear or rib cartilage or muscle tissue from the scalp or from behind the ears.

Is the result of rhinoplasty permanent?

Yes. However, the nose is subject to ageing. This means, over time the cartilage thickens, the nose tip droops a bit and the skin hardens. But a return to the state before the operation is impossible.